Proof of work vs proof of stake comparison

Proof of Work (PoW) is a widespread consensus algorithm used in cryptocurrencies. This algorithm stands behind the most popular cryptocurrency Bitcoin, and many other cryptos. However, this model is not perfect, and it has faced a lot of criticism, mostly, because of the amount of electricity the PoW-oriented facilities consume. Therefore, the crypto community has been long looking for alternatives, and Proof of Stake (PoS) has become one of such options helping to avoid this issue. However, PoS is not a panacea to all the possible issues as it comes with some specific flaws as well. In this article, we are going to study both approaches to highlight their pros and cons.

What are consensus mechanisms?

In terms of blockchain, a consensus is a mechanism that helps to attain agreement among different systems or distributed processes on the data value or the state of the network. The consensus mechanism is fault-tolerant and resilient therefore it is perfect for financial settlements and record-keeping. It makes cryptocurrency transactions reliable and represents a crucial component of decentralized systems.

Centralized platforms always keep their registries private. They are managed by a single administrator or a limited group of administrators responsible for the maintenance of the database and its updates. In such systems, no consensus is required as these administrators take the managing role on themselves.

Decentralized systems powered by digital currencies differ in their core as all members of the chain have copies of the ledger. It means that the data can be easily verified by them thanks to such technologies as a signature block, public keys, Merkel proofs, cryptographic hashing, etc. Decentralized systems imply using a trustless and distributed consensus. The members of such a network don’t need a third party that is always present in traditional centralized systems.

In a decentralized system, the database management is fulfilled by a large number of community members who verify and authenticate cryptocurrency transactions. For this reason, a highly efficient and trustworthy mechanism is required to prove the fairness of transactions that occur on the network. This is exactly what a consensus mechanism does as it regulates the activities with the help of established rules. The algorithm of consensus mechanism can vary depending on the principles it is based on.

The most common consensus mechanisms that have been invented so far are proof of work and proof of stake models.

The PoW mechanism was initially developed as an anti-spamming mechanism. Its goal was to prevent cyber-attacks such as DDoS attacks that make the computer system exhausted with numerous fake requests.

When applied to the blockchain, it serves to protect the network from the so-called 51% attack. Such an attack implies taking control over the majority of the network which enables attackers to reverse transactions and double-spend coins. PoW makes the whole enterprise economically inefficient and thus allows users to exchange value without having to trust each other.

Although PoS utilizes a different approach from the technical perspective, its final goal is similar. Let’s take a closer look at both of these mechanisms.

Proof of work pros and cons

Working over the Bitcoin blockchain, its creators known under the nickname of Satoshi Nakamoto looked for a way to verify transactions without using a third party that can be subject to a hacker’s attack or get censored by an authority. They paid attention to the idea of Cynthia Dwork and Moni Naor that dates back to 1993 and is associated with the term “proof of work”. It enables trustless and distributed consensus, therefore, this mechanism became the solution described in the Bitcoin whitepaper.

Proof of Work algorithm implies resolving complex mathematical puzzles. Every new block is linked to the previous one via a unique cryptographic key called ‘hash’. A miner has to guess this key by brute force trying one number after the other, which usually takes up to 11 minutes. This is where specialized hardware comes forth.

As the guesswork is conducted by machines, those who have more computing power at their disposal have better chances to win this race and find the answer sooner. As the complexity of finding new blocks grows in time, so do the requirements to the hardware, the amount of electricity, and thus the costs that their owners have to bear. To overcome all other participants and gain control over the majority of the network, one would have to spend so much money on the equipment, that it would never pay off. 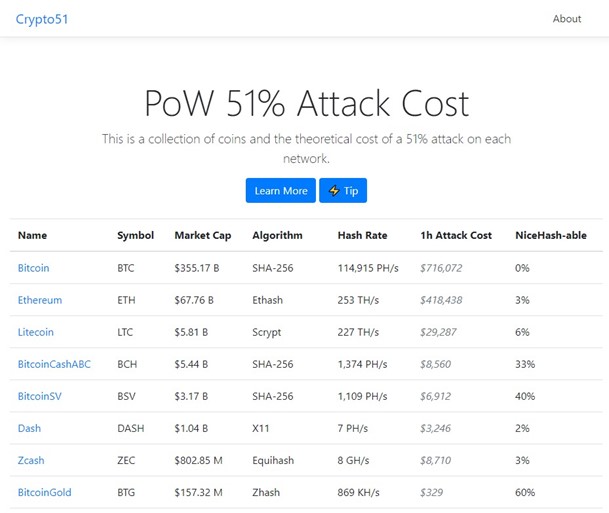 Crypto51.app: the bigger is the PoW-based network, the more expensive it is to conduct a 51% attack on it and vice versa

Proof of stake pros and cons

To remove the drawbacks of the PoW model, the developers have come up with an efficient alternative. In 2012, Sunny King and Scott Nadal developed the Proof of Stake mechanism.

The concept implies the capability of users to mine and validate transactions depending upon the number of tokens stored on their wallets. Consequently, the mining power depends upon the number of coins in the possession of a miner. The higher is the number of coins that you stake in the system, the higher are your chances to validate the next block. In this case, not the power resources are invested into the system for mining to process cryptocurrency transactions, but the assets stored on their own wallets serve as insurance.

There’s a downside to this approach, specifically in the small networks, as big stakeholders have higher influence. To by-pass this problem, multiple solutions have been invented. Thus, for example, Ethereum uses the attestation system prompting validators to attest to other proposals when they are not chosen to validate a specific block.

Another important aspect to consider when comparing PoW and PoS-based blockchains is how the transaction verification is carried out.

On PoW-based Bitcoin, a new block is found by the nodes every 10 minutes. The blockchain can cope with 7 transactions per second at the maximum. This limitation affected the cost of BTC transactions as, over time, it became considerably higher compared to the point when the blockchain only started its work.

Thus, at the end of 2017 when Bitcoin was on the rise, the fees reached 55 USD per transaction during the period of the highest network activity. This is what makes Bitcoin inappropriate for its further use as a global payment system.

Ycharts.com: Bitcoin fees reached the 55 USD level during the ‘bullrun’ in December 2017

As for the PoS systems, the validators don’t have to solve cryptographic puzzles, consequently, there is no need to upgrade the hardware and spend energy on it. The blockchain based on the proof of stake mechanism rewards its participants with fees instead of paying for newly minted blocks.

Summary of comparison Proof of work vs. Proof of stake

Although blockchains based on the Proof-of-Work consensus mechanism are still popular, the issues they possess make their future adoption questionable. Bitcoin will surely remain the most popular and valuable cryptocurrency in the upcoming years, but unless a scalability problem is resolved, it will remain a solution for long-term storing of value rather than for daily payments.

PoS provides higher transaction throughput solving this problem which makes it a more viable solution for further adoption of blockchain.

What other cryptocurrencies are based on PoW?

Litecoin is one of the first Bitcon’s derivatives based on PoW that tried to resolve the scalability issue by increasing the size of the blocks. Other solutions include Bitcoin Cash, Dash, Decred, and Bytecoin.

What cryptocurrencies run on the PoS consensus?

Some examples include Binance Coin, Polkadot, Cardano, Cosmos, and Elrond.

What is the consensus mechanism utilized by Ethereum?

Initially, the Ethereum network was running on PoW. Due to the scalability issue, developers have made a decision to implement the Casper protocol that implies switching to PoS. They have accomplished the goal at the end of 2020.