Within our legal and economic systems, the indispensable reliance on trust and contracts form a key building block to safeguard individual rights. The inception of blockchain technology and smart contracts has revolutionized traditional systems by eliminating the requirement of a centralized and third-party trust protocol. Blockchain is evolving rapidly with several big-name platforms to choose from. However, each platform has its specific algorithms, audit capabilities, characteristics, opportunities, and challenges. In this article, we will draw an EOS vs Ethereum platform comparison for two of the biggest smart contract development platforms.

What is a smart contract?

A smart contract is an enforceable, auditable, and automatable agreement via a tamper-proof execution through computer programming. Smart contracts are similar to traditional contracts used in the real world, however, unlike the latter, the former is completely digitized with advanced algorithms. Thus, we can define a smart contract as a computer program stored inside a blockchain and intended to digitally enforce performance or negotiation of contracts. They facilitate the execution of transactions without requiring a mediation process by third-parties like banks, brokers, or governments.

A smart contract primarily functions like a ‘multi-sig’ account where funds are spent provided a certain percentage (or majority) of people agree to a set of predetermined conditions. Smart contracts can be executed automatically, using a web or mobile platform, once the agreement’s conditions are fulfilled. Smart contracts can help exchange property, shares, money, or anything that has value, in a conflict-free, transparent, and auditable manner.

Let’s imagine that Tom wants to buy Jerry’s car. The traditional process of executing this transaction would involve the signing of legal agreements that are drafted by lawyers, and the involvement of intermediaries like banks, car brokers, and motor authorities. However, in the world of blockchain, it can be executed using a smart contract, which contains the agreement between Tom and Jerry. In simple terms, the agreement will be something like:

“WHEN Tom pays Jerry 200 Ether, THEN Tom will receive the ownership of Jerry’s car”.

Once this smart contract is put in place, it cannot be changed unless such a functionality is implemented into them. Moreover, all stakeholders of the contract will have to accept such an implementation. Thus, Tom can feel safe to pay 200 Ether for the car. If a smart contract is not used in this scenario, Tom and Jerry would have to pay third-parties like banks, car brokers, and lawyers.

Introduction to “EOS vs Ethereum comparison”

Among available public blockchain, Ethereum and EOS are the most reviewed to draw platform comparison and gauge their strengths and weaknesses. So let’s take a closer look at this eos vs Ethereum guide.

Transaction latency is an important characteristic of a decentralized network. It is the total time that a system takes to execute and validate a transaction. While existing blockchain solutions lack in latency, EOS requires only 0.5 seconds to create new blocks. Thus, a large number of startups and blockchain consulting firms choose EOS for their applications owing to its scalability which can support millions of users. The transaction fee is another major concern for dApps built on a blockchain. Existing smart contract platforms like Ethereum require a user to pay the transaction cost to promote miners. EOS has eliminated this issue by allowing users to perform gasless transactions at zero cost.

EOS also permits well-defined permission levels by incorporating self-describing interfaces, a web toolkit for interface development, self-describing database schemas, and a declarative permission scheme. Lastly, EOS provides a flexible governance system by establishing the choice of law and jurisdiction, in tandem with other mutually accepted rules. Every EOS transaction requires a secure hash of the constitution to the signature, which binds the users.

Despite its several advantages, EOS is still in its nascent dev stages and has several competitors like Ethereum, NEO, Rootstock, RSK, Hyperledger, and RChain. Thus, even though the EOS community may implement a blockchain to support the Ethereum-based EOS token holders by providing credits on the new chain, it is not legally mandated. EOS’ DPoS protocol can be considered centralized as it depends on merely 21 block producers for transaction confirmation, which could lead to a handful of data centers who would run the network. Another drawback of EOS is the lack of audit capability as a normal user can’t audit the system without running a full node.

Ethereum is a leading enterprise blockchain platform and a pioneer in decentralized applications (DApps) and smart contracts. Let’s take a look at some strengths and weaknesses of Ethereum.

Over 50% of companies with a market capitalization of $1 billion are programming applications using Ethereum’s technology. Given that Ethereum was initiated in 2013 and officially launched in 2015, it has high credibility and long term history in the market as opposed to some new players like EOS, and NEO. Ethereum’s open system allows anyone to join and develop on it. This provides a significant advantage to Ethereum as opposed to other non-open platforms like Hyperledger, which lack the network effect.

Ethereum also enjoys a large stake of the developer community with over 18% crypto developers working on it. Ethereum allows a seamless way to build a secure and private transaction technology. Quorum is an epitome of the same. Moreover, the one-stop BaaS platforms like Amazon Managed Blockchain and Microsoft Azure, and SaaS platforms like Consesys-supported Kaleido, make it easy to adapt Ethereum

Though Ethereum is one of the most advanced enterprise business solutions platforms, it also has some disadvantages. The key issues are scalability and transaction speed. Ethereum’s public chain can handle merely 15-20 transactions per second (TPS), as compared to businesses like Visa which processes 45,000 TPS. Another disadvantage of Ethereum is the possibility of system failures during development, as the platform is still being built. For example, to make it scalable, its consensus agreement is being transitioned into a 2.0 upgrade.

Now that we have individually compared EOS vs Ethereum, let’s elaborate on certain key properties.

EOS, on the other hand, was developed with scalability in mind. By enabling parallel transaction processing and maintaining lower block producers, it can speed up the throughput. Currently, EOS’ throughput is around 4,000 transactions per second. Moreover, EOS’ vision has scalability as a top priority, to enhance scaling and parallel smart contract execution. Thus, EOS is the fastest option in ‘single shard’ applications.

EOS operates on an ownership model. Since the user owns the resources like CPU, Bandwidth, and RAM, a user doesn’t need to pay rent on the EOS platform. Thus, EOS operates as a decentralized operating system as opposed to a decentralized supercomputer used by dApp developers. Moreover, since EOS has limited resources, it does not permit a user to hold tokens for long. If an account is inactive for 3 years, it gets terminated. Thus, users do not need to pay a transaction fee on the EOS network.

Contrary to EOS, Ethereum operates on a rental resource system which means a user needs to pay transaction fees to use the blockchain. Such a transaction fee is called gas. Every transaction on the Ethereum blockchain network has to be paid using the Ether token, which fuels the network and ensures security. The transaction cost increases with an increase in the price of ETH.

Ethereum leverages the proof-of-work mining algorithm where each node computes a puzzle. This puzzle is difficult to solve and any miner wanting to contribute needs to connect to the network. The miners compete and receive Ether as a reward. Since the block generation time is directly proportional to the transaction rate, Ethereum implementation has reduced the time from 10 min (in case of Bitcoin) to 15 seconds. Research showed that the block generation time reduces and stabilizes when miner count becomes 4.

EOS uses Delegated proof of stake (DPoS), which is more robust as stakeholders vote for the witnesses. This lowers the block generation time as transactions can be confirmed faster. In DPoS, a user holding the coins cannot validate transactions but can vote to determine the verifier of transactions. Thus, irrespective of the number of miners, EOS can produce new blocks every 500 milliseconds. 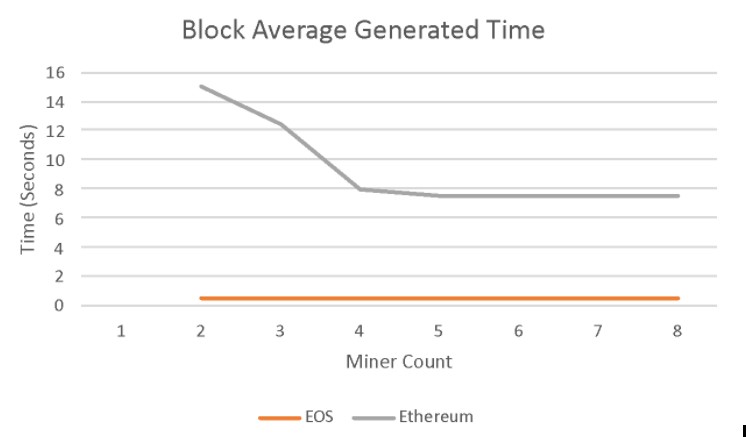 Both EOS and Ethereum are stalwarts of the blockchain and smart contract sector. EOS has improved many of Ethereum’s issues such as scalability and transaction fees by lowering the people count involved in its consensus and making the EOS system centralized. Ethereum, on the other hand has a strong community following and is completely decentralised, but needs to incorporate scalability techniques to make their system faster.